Kluane, the Cassiar Highway, and Bella Coola - Worth the Detour!

Not counting the ferries, there are really only two ways to drive into Alaska, both of which follow the Alaska highway before splitting off near Whitehorse in the Yukon. We drove into Alaska via the southern route and drove back via that same route so we could visit Kluane (pronounced Kloo-ah-nee) National Park. You may recall from the prior blog post that Kluane is the Canadian neighbor of Wrangell St. Elias and therefore shares a lot of the same rugged, mountainous, glacial terrain that define the area as a whole. Much like the Alaskan park, Kluane is remote and relatively undeveloped, with only a dozen or so trails, few of which penetrate deep into the park. Given that our time in the park was limited to a day, a quick trip to the visitor center revealed that the most appropriate hike for our criteria was the King's Throne.

Now, before we get into what proved to be the most unrelenting, sloggiest, type 2 kinda fun hike I've ever done, it helps to understand some of the history surrounding the area. The visitor center is a fabulous resource for learning and I would certainly recommend spending at least an hour perusing the artifacts and reading the signs to see the impact of development and the toll the construction of the Alaska highway wreaked on the Native people. To make a long story short, the Natives were nomadic folk who would winter in the lowlands adjacent to the park while spending the summers at higher elevations to take advantage of the abundant hunting opportunities. While they were up there, the construction crew came blazing through their winter village and seeing that it was seemingly abandoned, razed the whole thing with bulldozers. The Natives returned to find their homes and their way of life forever disrupted and only through the conscious preservation of their culture (much like in the United States, the Canadian government also instituted integration programs that stripped Natives of their language and culture in an attempt to assimilate them into the Western world) have they regained some of their stories and way of life.

Now, on paper the King's Throne was a difficult, yet attainable hike, but nothing could have prepared us for the the ascent. After a relatively flat 1.25 miles of walking we came to the uphill, a real leg burner of an uphill through the forest with a couple of switchbacks along the way to help break up the monotony. While tough, we set a good rhythm that was rudely interrupted when we broke out of the trees and stared what felt like straight up. The trail had morphed from difficult to treacherous as it started climbing up the shale slope. Part way up Ashley and Chewie threw in the towel, it was just too steep to ensure that neither would fall and hurt themselves.

Ever the glutton for pain, I pushed on with Rigby and Marley, powering up the slopes with a two steps forward one step back approach. With my heart beating in my ears we finally crested the false summit and attained our summit inside the glacial cirque. The views were truly spectacular, 180 degrees of nothing but trees, water, mountains and sky. It was a sight to behold.

We milled around for a few minutes to take pictures before we turned our sights towards the bottom. The down was predictably more treacherous than the up, but all three of us returned safely with only a few minor instances of shale surfing, none of which resulted in a tumble. Good news! With our crew reunited we polished off the remaining downhill, rolled into town famished, crushed a pizza, and hit the road South again.

When heading South through the Yukon, there's a fork in the road at Watson Lake. To continue East sends you back to Dawson Creek, BC, the official start of the Alaska Highway. We took the road less traveled and detoured South along the Cassiar Highway which would take us deep into the interior of British Columbia. Now, the funny thing about British Columbia is most people think of Vancouver or Whistler when imagining what the province looks like. This couldn't be any further from the truth. Outside of the Vancouver/Squamish/Whistler area, the province is full of sparsely populated wilderness. The Cassiar highway is proof of this, traversing some of the province's most isolated areas along its 543 mile length stretching from Watson Lake, YT to Kitwanga, BC. 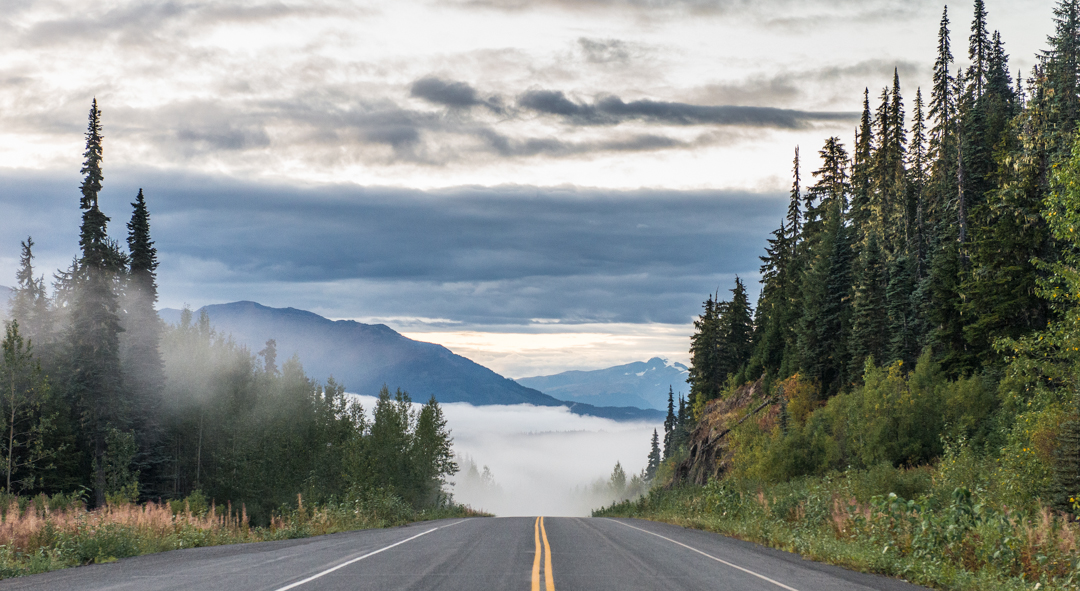 The drive is notable for its rough road surfaces, long stretches between towns (most of which are but little outposts), and Jade City, the worlds foremost producer of jade. Fuel is scarce, so top off when you can, sit back, and enjoy the ride. Oh, and did I mention we had a 45 minute stretch where we saw 9 black bears? :)

Now, the real reason we took the Cassiar Highway was to get to Bella Coola, BC. Bella Coola is a tiny fishing village on the West coast of BC that first came to our attention as a grizzly bear haven. During the salmon spawn, the bears emerge from the woods to eat their fill before winter descends. Having failed to see a wild grizzly bear in Alaska we booked a float tour that darn near promises to see a grizzly bear up close and personal as you float lazily by, which is just plain awesome.

The Bella Coola adventure begins some 400 miles away from the town itself when you turn onto route 20, the single road in/out, beginning in Williams Lake, BC. Route 20 skirts countless miles of wilderness along the way, broken up by only a few expansive ranches and small towns. Along the way you'll see wild horses, moose, suicidal birds, and if you are lucky like us, experience a September white-out snow storm. However, these sights pale in comparison to the last 60 miles of the road which descend from the plateau at Heckman Pass to the seaside enclave. Heckman Pass, for the unfamiliar, is featured on dangerousroads.org, which may hint at the white knuckle drive. The road descends 5,000 feet over those 60 miles with a goodly portion the elevation drop coming in a single, 15 mile section featuring grades up to 18%. Not for the faint of heart, this road demands your concentration as you traverse the myriad of mud slick switchbacks, all while staring over the crumbly dirt edge with no guardrail and a drop that would most certainly spell death. Fun right?!

As an aside for the history nuts, the town of Bella Coola was, up until the 1950s, only accessible by boat. The first 340 miles of route 20 had been completed and funded by the BC government, but they stopped short of building the remaining 60 miles as it was expensive and viewed as unnecessary. Undeterred by government inaction, the town of Bella Coola purchase two bulldozers and self-funded the construction of the road. One bulldozer began at the bottom with the other beginning at the top and both rolled towards each other cutting the road down Heckman Pass. It took two years to complete the dirt road but it speaks to the tenacity of the local folk.

Back to our story. With the descent under our belts we rolled into the Bella Coola valley with vigilant eyes, wondering if the next bend would be the one that would reveal a monster grizzly. No such luck however, and our drive to the Rip Rap campground was uneventful. Now let me tell you about the Rip Rap Campground, as it holds a special place in our hearts. It has almost everything a camper could want, relative seclusion, access to the river, wildlife abound (lucky us, we got the site that a grizzly bear had traipsed through only the day before!), but most importantly, a heavenly retreat called 'The Shed'. The Shed oozed coolness and ambiance, and Ashley and I spent nearly every free moment in there reading books or sitting in front of the wood stove enjoying the heat.

At last, the day had arrived for our bear tour. Unfortunately, the rain arrived with it. This should be no surprise seeing as how Bella Coola is within the Pacific coast rainforest and they get more than their fair share of precipitation. We donned our rain gear and, after hearing about all of the bears spotted the prior days, eagerly hopped into the rafts and set off with great anticipation.

We floated along while listening to the guide talk about the local ecosystem and the salmon spawn. Yet still we saw no bears. With each passing minute our hopes grew dimmer, especially when we began to get nearer to the river exit with merely 1 second of a bear running off to our credit. As we floated up to the exit we saw a small crowd on the banks murmuring amongst themselves and pointing across the river. A lone female had emerged from the brush and was picking her way through the salmon carcasses. Ashley and I plopped ourselves on the shore, watching her every move as if we were hypnotized. It couldn't have been any more than 5 minutes before she wandered back into the trees, but we had what we came for. With that my friends, we had our pictures and the story to go along with it.

We spent a few more days in the area, but truthfully we came for the bears and everything else was just extra. We ventured into Bella Coola (not much there) and took a stroll on the Ancient Tree loop (really cool, lots of massive cedar trees).

Before long it was time to depart as lower BC was next up on the schedule. Whistler here we come!

The Alaska Wildlife Conservation Center: For when you can't seem to find that bear in the wild